Or so I imagine is what one elderly Singaporean man was thinking when he packed his bags on the way to his ancestral home of Hainan, the island province off the coast of Southern China. His grandson eyed the jar of chili oil with curiosity. How could that make the cut? With so many delicious dishes named after the place, it was hard to imagine that a trip to Hainan would require a personal stash of condiments.

And yet, when he arrived in their ancestral village and sat down for his first meal, he couldn’t have been more dismayed. The chicken was bony, the sauces bland, and curry rice–well, it simply didn’t exist. Despite their names, the “Hainanese” chicken and curry rice he so adored were actually created in Singapore by Hainanese immigrants, who adapted their cooking to the significantly richer and spicier local tastes. In contrast, the food of Hainan is delicate in flavor, as is typical of Southern China. 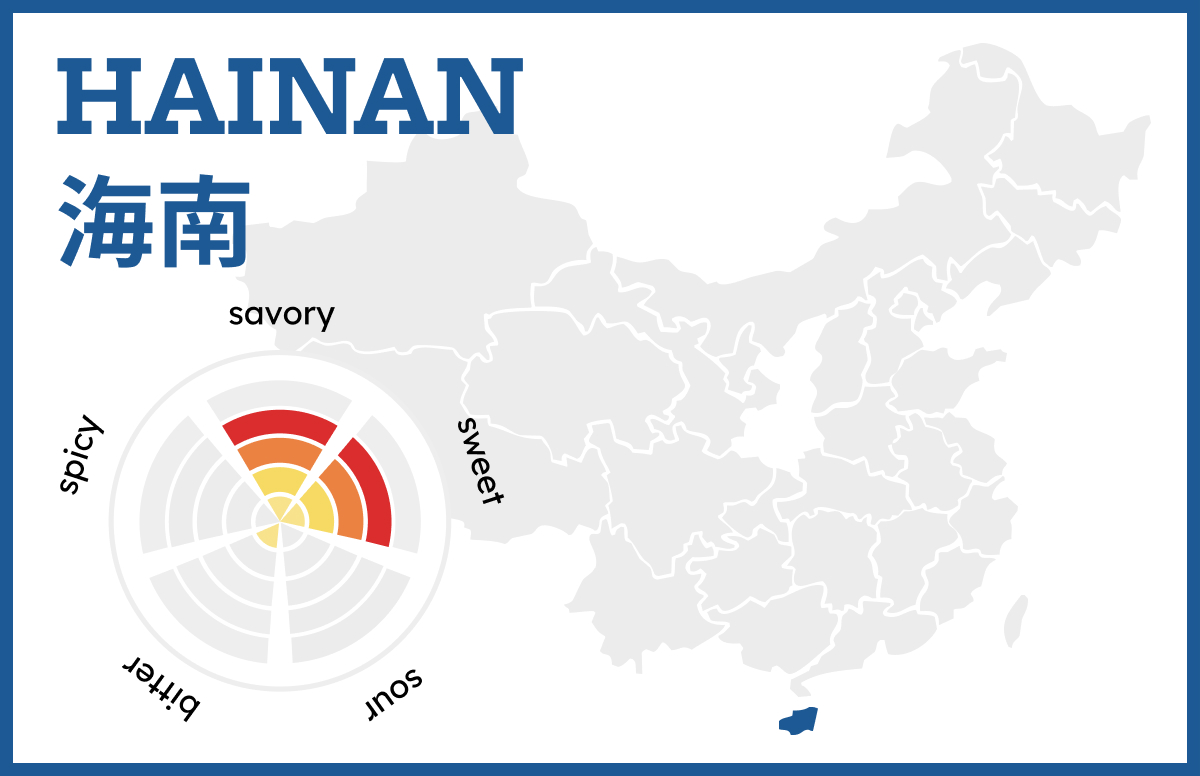 Hainan is perhaps most famous for its beach resorts. Throughout the year, Chinese city-dwellers escape to Sanya, Hainan’s southernmost city, to sprawl on beach chairs, scuba dive, and enjoy the Four Famous Dishes of Hainan: Dongshan lamb, Hele crab, Jiaji duck, and Wenchang chicken. Though I’ve never had the chance to visit the island and try them myself, I have no doubt that each is delicious in its own right. However, for this issue’s menu, I wanted to share a recipe that features one of the most unique aspects of Hainanese cuisine. Though coconuts are not a common ingredient in China, they play a major role in the culinary landscape of Hainan. The result is fresh, fragrant, and simply lovely.

As someone who chooses to cook despite being surrounded by all the cheap, delicious food Harajuku has to offer, my motivation to make a recipe very rarely involves words like “weeknight-friendly.” Despite that, this issue’s Hainanese coconut chicken soup perfectly fits that description. Not only does it come together in just minutes, it will happily bubble away on the stove while you prepare other dishes, such as the simple dish of za cai (vegetable stew) I’ve paired it with in this issue. The traditional recipe calls for breaking down whole coconuts, but in the spirit of minimal-effort cooking, my adaptation uses pantry staples: dried coconut shreds and coconut water. All you need is some chicken, and you’re good to go!

A bit of a pickle

Fermentation is all the rage these days, at least for the food nerds among us. I’m no exception–in typical quarantine fashion, I’ve spent the past few months making nukazuke, Japanese rice bran pickles that are wonderfully easy to make at home. (I’ve also developed a possibly bad habit of eating kimchi straight out of the fridge.) But what about the theme of this zine? What are China’s claims to pickling fame?

One of the most famous is 榨菜 zha cai, a type of pickle made from the stems of mustard greens (not to be confused with the similarly-named 杂菜 za cai recipe featured in this zine). Though not as visually stunning as some of its more brightly-colored brethren, zha cai's claim to fame is its crunchy-yet-tender texture and punchy flavor. The production process is similar to kimchi–salt, press, dry, apply chili paste, and ferment–but due to the higher salt content and a quick rinse post-ferment, the end result is less spicy and much saltier. This intense saltiness makes zha cai rather unpleasant to eat straight – instead, it plays a key role as a condiment in noodles, congee, soups, and more. 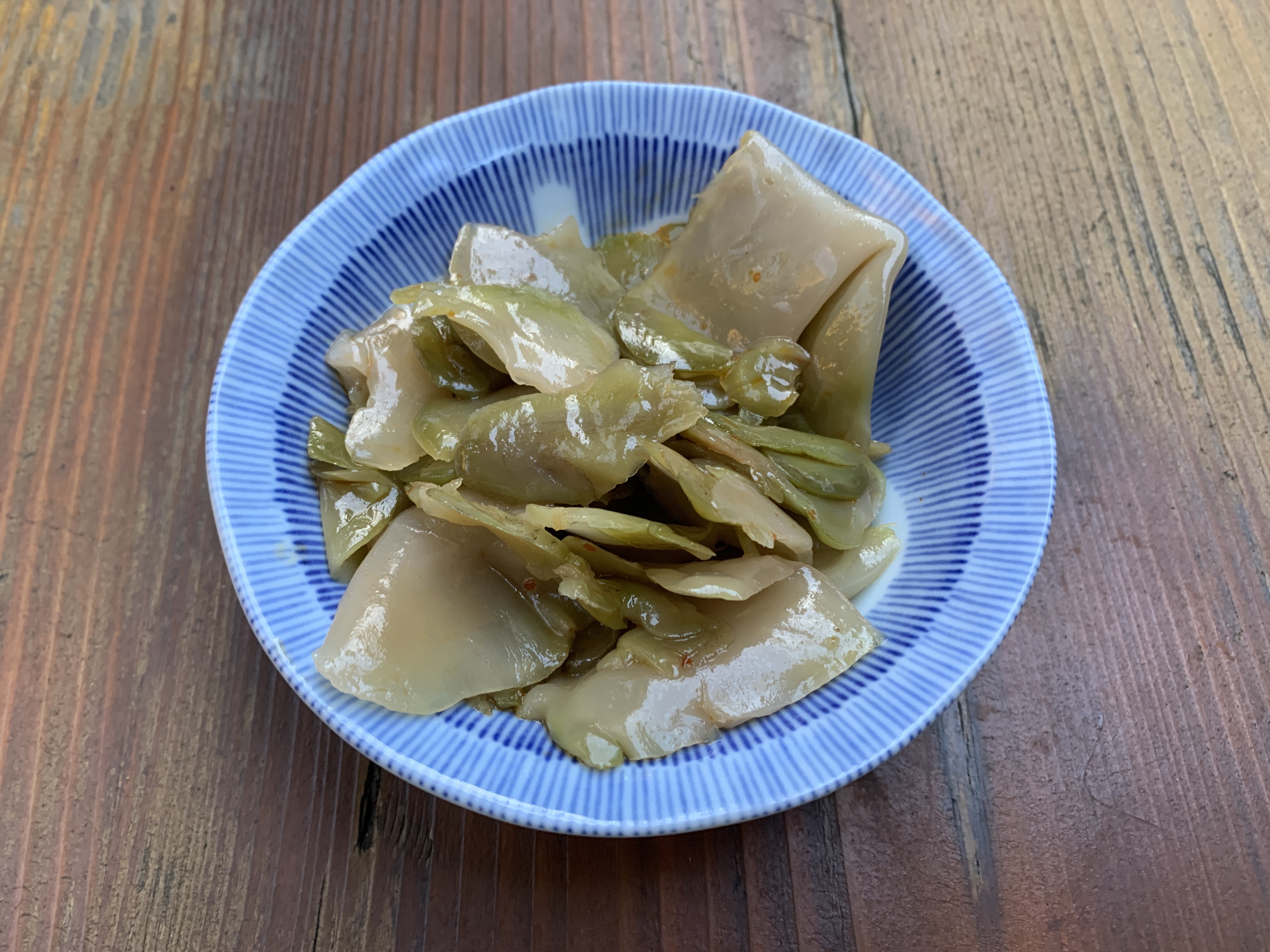 Here in Japan, you won’t find fortune cookies at your local Chinese restaurant, but you’ll often find some variant of zha cai, or as it’s known in Japanese, ザーサイ (zāsai). The variants you’ll find here have been adapted to Japanese tastes and are more suitable for eating directly… so if you’re me, perfect for purchasing little packs of to eat straight from the fridge.

That’s all for this issue! I hope you enjoyed this culinary tour through China's southernmost province. We’ll be back next time with another destination from the wider Chinese diaspora.